With Wilton Lodge being a Grade II-Listed building, any advertisement on the façade must be in keeping with the period, around 1820, a time when many trades and professions used gilded signs, such as the pawnbrokers’ three golden balls. After about three years of searching, Clive Marks finally found the accompanying print showing a Golden tooth outside a dental practice, albeit one in France. It was then a matter of obtaining planning permission, listed building consent and finding a craftsman to accept the commission.

The Origin And Comission

The telephone directories listed only one woodcarver, Ian Brennan, so Clive Marks gave him a call and outlined the project. Initially there was silence, “Oh dear” he thought, and then came a chuckle. They were on the same wavelength of fun and the project was under way!

Ian’s workshop is in his garden shed, which seemed unprepossessing from the outside but that thought vanished as soon as Clive walked inside. The place was full of exquisitely crafted pieces of many styles but a few finished pieces caught my eye as they looked very familiar. It was soon clarified that these were indeed the crest for Knights of the Garter and Knights of the Bath and that Ian holds the splendid title of Woodcarver by Appointment to Her Majesty The Queen No record has been found of any British Golden Tooth and so this could be the first one ever to hang outside a dental practice in Britain. The Daily Echo was fascinated by this unique commission and produced photo stories about it at various stages during its creation.

By the time the finished tooth arrived at the practice, swathed in a cocoon of black velvet, only Ian and Clive Marks had seen the real item. Local and national dental dignitaries had been invited to take part in the unveiling in front of television and press cameras. The result was almost two minutes of coverage on the local television news. It was also covered by BBC Radio Solent who picked up on the fact that the unveiling took place at half past two, or “tooth hurty” as they put it! 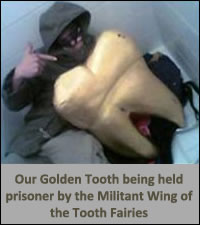 In February 2003, at about 3 a.m., the tooth was stolen and three lads were seen staggering up the road with their booty. Staggering is an appropriate way to describe them, not simply because of their intoxication, but because the tooth, rather than the fibreglass which most people assume, is actually made of solid elm and weighs over five stone.

This should have been distressing but it seemed so ridiculous that it turned into a comedy show, with the full cooperation of the police: the hospital records were checked for anyone needing a rather large tooth removed from their skull; the local student newspaper was given the exclusive story (on the presumption that it was a student prank); the theft was named a “raid by the Militant Wing of the Tooth Fairies”; the policeman at the centre of the investigation got nicknamed Nasher of the Yard. The immediate publicity hit the national and even foreign papers. Very soon we had patients who live around the country and abroad phoning up to commiserate with us, having read about it in their local papers within hours of the theft!

The student paper acted as a brilliant intermediary and helped get the students to play along with the idea of turning their misdeed to some good through helping to “Ransom the Golden Tooth from the Militant Wing of the Tooth Fairies” in aid of Comic Relief, which was happening a few weeks later.

The students duly sent a photograph of the tooth being held prisoner and the ransom notes were distributed around businesses in Bedford Place. About £200 was raised and the tooth was returned. It then had to be repaired and regilded.

A last laugh will happen a few years down the road when the children of those students start losing their first teeth and ask “… and why do you always go red when we ask about the tooth fairy, Daddy?” Tee-hee.

In August 2018, the blocks of English Elm that were used to create the Golden tooth started to split apart.  It was therefore taken down and replaced with a dummy until the real one could be restored.  That process took rather longer than anticipated.

Once the three blocks had been separated, it was discovered that water had been penetrating for considerable time and so it was necessary to re-season the wood before it could be reassembled.  Clive therefore stripped the wood of all it previous gilding and kept the blocks in his garage over the winter so that they could dry out.  Once the air temperature reached a stable height in the spring, he was able to use epoxy resins to bond them back together before sanding the whole tooth smooth again.

The tooth was then driven up to London so that it could be regilded by the fabulous team at “Carvers & Gilders” (www.carversandgilders.com), close to Battersea Dogs Home.  They work in a couple of the railway arches and are a fabulous team of craftswomen who buzzed with excitement as soon as they saw the tooth.  It had found the team who were going to give it the love and attention it needed to sparkle again.

There were so many styles of gilding to choose from, so Clive opted for the shiniest one possible!

Several months later, Clive got the call that the tooth was ready for its return journey but how could one get it back without touching the 23.5 carat gold?  Much soft packing had to be installed in the back of the car and the whole 5 stone of the tooth had to be carried on a pair of broom sticks.

Once it was back in Southampton, getting it from the basement up to its bracket took over an hour of careful manoeuvring.  When the press arrived for the new unveiling, they wondered if we could just lower it again so that they could film it being put back in place.  When the delicacy of the manoeuvre was outlined to them, they realised that that was not going to happen and they were happen to take pictures of Clive unveiling it.  After a year, the tooth was back to its sparkly best.

The realities of COVID-19 mean that changes will be developed to our advertised opening times. Please call us about any appointment and bear with us while we develop the new normal.